Have you ever wondered why the Moonlight Sonata was so famous ? And so slow ? And so long ? And so boring ?

These are, of course, loaded questions and not fact. But it is true to say that the work has for a long time been the object of fun, like in this exchange between Victor Borge and the Muppet.

So was it meant to be so slow ? And why have so many critics objected to the subjective, Romantic nature of the title “Moonlight”, which has at times been called “a misleading approach to a movement with almost the character of a funeral march” and “absurd”.

There is clearly a problem with this ultra-famous piece if 90% of music lovers think it’s the bee’s knees and some of us think it’s a complete mashup.

Well, let’s look at the score in the original edition printed by Giovanni Cappi in Vienna in 1802.

The small print in Italian is an instruction from Beethoven saying the pianist should play the piece very delicately and without the sordino pedal (the sordino was not like the soft pedal today and made a gentle metallic sound a bit like a clavichord).

But what else do you see ? Beethoven is telling us something we all seem to miss. It is that he writes

at the beginning of the piece.

Now, all pupils at music school learn that this sign (also called “Alla breve”) means that it should be played (not thought, as some teachers tell them) in TWO beats in a bar and not in FOUR, which would be the case if there were no bar in the sign (

Remember that the written instructions that the composers left us on their scores were the only way they had of telling us how they wanted their music to sound. They had no other way of making sure their creations weren’t turned into something else. In any case, there were no mp3s, to be sure, and Mr Mälzel’s metronome wasn’t yet completely satisfactory.

And so it is a bit naughty of us not to take what they wrote at face value, even just to see what happens.

And what happens in quite a lot of music is actually quite astonishing!

Because the reason that the Moonlight Sonata’s first movement is so slow, is that we all play it in FOUR beats to a bar, and not TWO.

Maybe we thought that the great Romantic Composer Ludwig van Beethoven  was in love with Madame Guicciardi (to whom he dedicated the piece) and was dreamily thinking romantic thoughts on a summer afternoon.

No. What happened is what often happens when great men die. They get improved. The improver in this case was a famous pianist called Ignaz Moscheles who built up a reputation for being an expert in Beethoven after the composer entrusted him with the preparation of the piano reduction to his opera Fidelio. 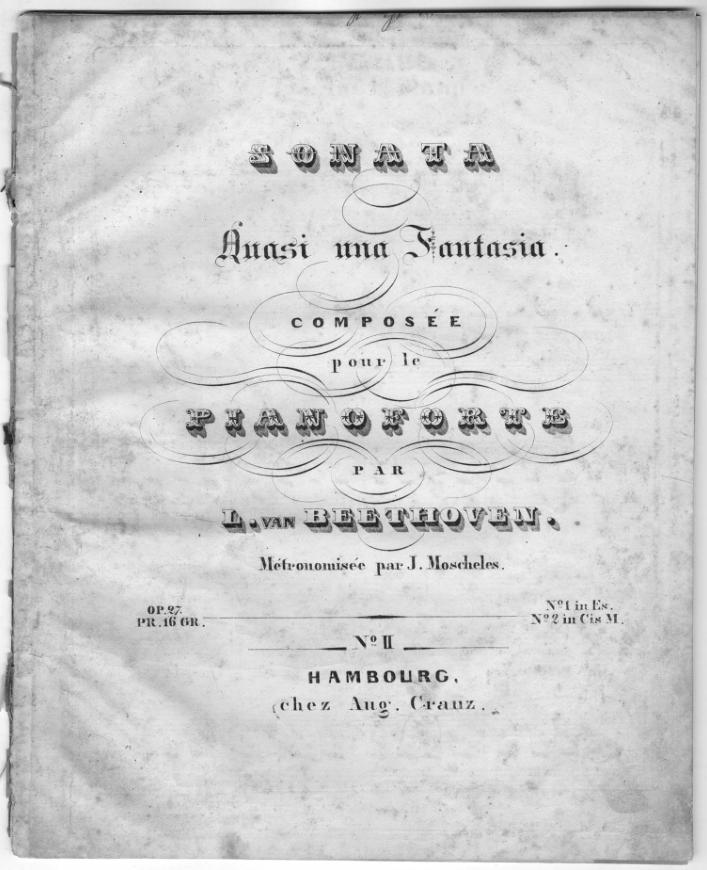 Mr Moscheles was so in demand for his advice about the way one should play Beethoven that he published  his own edition of a couple of Beethoven’s sonatas with metronome markings.

Beethoven wasn’t even dead and probably would have had a heart attack if he’d known what his protégé was doing to his music (this edition came out in 1814 in Hamburg, a long way from Vienna and news didn’t travel fast), and Beethoven had still 12 years to live.

has disappeared in favour of the common-time sign of

. And to leave no doubt about it, Moscheles adds the precision afforded him by the metronome (his version of the smartphone in terms of contemporary technology) and states that the piece should be played at 60 beats per minute (BPM), which is exactly what Google states today. One can’t but admire his judgement !

But it’s not what Beethoven wanted nor asked for. It’s just what we’ve got.

This means that the music, at 60 beats per minute when one beat is the quarter note in C time (4 beats in a bar), goes like this :

At 60 beats per minute when one beat is the half-note as Beethoven asks us by putting the alla breve sign (2 beats in a bar) at the beginning of the stave, it goes like this :

I have asked the magnificent young pianist Ingmar Lazar to play this movement for us (and the rest of the whole sonata) at the speed that the composer indicates. When we are able to get that on line, you will be able listen to him and get an idea of the proportions between the movements which are completely different if commenced in this way.

So how did the Moonlight Sonata get its name ? The (quite correct) explanation on Google says : The name “Moonlight Sonata” has its origins in remarks by the German music critic and poet Ludwig Rellstab. In 1832, five years after Beethoven’s death, Rellstab likened the effect of the first movement to that of moonlight shining upon Lake Lucerne [“der erste Satz klingt wie Mondschein, der auf den Vierwaldstätter See scheint”].

How interesting ! Why has no-one thought to look at the music and wonder why there is such a gap between the title and the sound ?

Unless, of course, the music that Rellstab heard made him think not of the romantic atmosphere of a “barque” or boat on the lake (the idea of gently swaying movement is plausible) – but of the reflection of the moon on the lake’s waves. Like this detail of a painting from 1858.

If you are see the same as I do, read no further. If not, I invite you to do a small experiment.

Close your eyes and beat a measure of two in a bar, going from presto, through allegro to andante, then slowing down to adagio and then to lento or largo (whichever you prefer).

Then go back to adagio.

into one single beat of the adagio tempo and bear in mind what is said elsewhere about it :

Many critics have objected to the subjective, Romantic nature of the title “Moonlight”, which has at times been called “a misleading approach to a movement with almost the character of a funeral march” and “absurd”.

How interesting ! Why has no-one thought to look at the music and wonder why there is such a gap between the title and the sound ?

For some unknown reason (difficulty to keep the music flowing ? imperfections in the early Broadwood instruments on which the piece might have been played ?) or some telluric influence we all fall under when we open the piece, we play the piece just TWICE as slowly as it ought to be played – and indeed as Beethoven instructs us to.

Why have we musicians have become so complexed about what the composer means, when most of the time we don’t even try the instructions out to see what happens when we do ?

Maybe it interferes with what we know he ought to have written  because it doesn’t fit in with our knowledge of “performance practice”, a concept which is itself far from clear … because of the very nature of what we call it which is “how we practise performance” (back to square one).

It’s not always clear what the composer means, but that shouldn’t be a reason for not doing what he says, then disagreeing (perhaps).

So try it out ! Be scientific !