Peter Vizard is titular organist of the historic Cavaillé-Coll organ at the United Protestant Church of Pentemont Luxembourg.

He is also director of the Ensemble Via Luce, an ensemble he founded in 2016 with Agathe Mayeres. The ensemble is composed of young professional musicians and is based in Paris.

Prior to that, he was director for over 20 years, firstly of the École Nationale de la Haute-Loire then of the Conservatoire Frédéric Chopin in Paris.

Peter is also a musicologist, continuo player, professor of music and translator.

His career began at the age of 7 as chorister at King’s College, Cambridge. He subsequently went to Brighton College and from there to the Royal College of Music in London where he studied organ, piano, singing and conducting. He finished his studies in the UK at Gonville & Caius College, Cambridge where he obtained his Master’s Degree in Music.

He then moved to Paris where he entered the Conservatoire de Paris  and Groupe de Recherches Musicales in electronic music. While at the conservatoire, he worked as producer at France Culture, Radio Classique and Le Monde de la Musique. He also studied conducting with Igor Markevitch and Sergiu Celibidache. 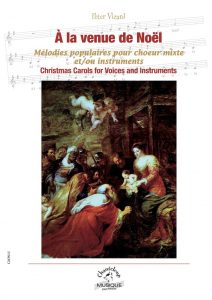 As a composer, he has made various arrangements and compositions for voices, including a collection of Christmas Carols for voices and instruments “A la Venue de Noël” published by Chanteloup Musique in 2015.

In an article in L’Éducation Musicale of December 2015, Daniel Blackstone wrote :

This work is first written for choir but lends itself to many instrumental combinations. It contains most well-known traditional French, German and English carols subtly harmonized in a way that is both traditional and, for some at least, original.

We particularly liked the bell effect in the arrangement of “Il est né le Divin Enfant”. We think it’s a collection that will interest both choirs and amateur or school ensembles.