The classical music repertory has a few wonderful works that are famous enough on their own for the name instantly to conjure up the sound.

The composition that immediately preceded the Mozart symphony, the 39th, is one of those pieces that can intrigue anyone who is interested in questions of tempo because, like the first movement of Beethoven’s Moonlight sonata, (see Moscheles Moonlight Mistake) the introduction is almost always beaten in four and almost never in two as the composer requests (beaten in 4 means that it is half as fast – or twice as slow).

You may ask what difference does tempo make to a piece of music. The answer is quite simple : the tempo controls how we feel the piece of music in the same way as the proportions of a room control how we find our place in it.

It is the parameter of length (time) versus height (density) which determines how we relate to it. Imagine Notre Dame de Paris being the same height but twice as long (or twice as wide). Or Michelangelo’s David twice as fat.

It isn’t the same building, nor the same sculpture at all.

The joke sculpture “David returns to Italy after a stay in America” is of course not a perfect parallel but all the same it does illustrate how proportions matter.

And the same goes for music.

This is particularly true in opera where singing something at the correct speed (the performer’s responsibity to respect the composer’s wish, if we read his instructions correctly) will communicate the spirit in which the chorus, aria or recitative was conceived that has a direct influence on the dramatic effect and on the way we think about the story.

In purely instrumental music, this is not as crucial but nevertheless has an impact on the meaning of the work which gives us a sense of purpose or, as often, the feeling that the composer is talking at us rather than to us.

To illustrate the point, I would invite you to listen to the following extract from a concert given by “L’Orchestre” I conducted on 18th December 1984 in the Church of St Germain L’Auxerrois in Paris. You can check how most people think it should go by looking the work up on youtube. 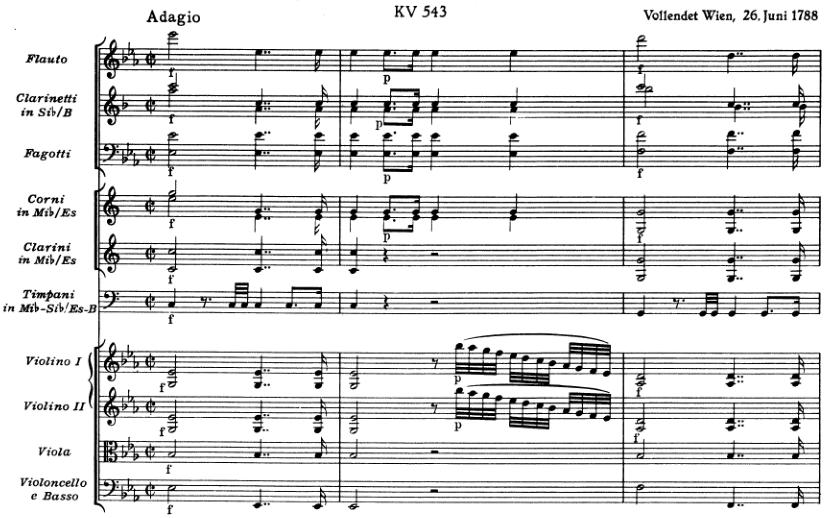 You will find the tempo faster than usual. This is a literal reading of the tempo indication from the urtext Neue Mozart Ausgabe Edition which shows “alla breve” indicating the composer’s instructions to play it by beating 2 in a bar (and not in 4 as marked in earlier editions).

Interestingly, the following allegro is perceived as slower and not faster than the introduction. The logic for playing it in three and not a slow 1 in a bar is that, following the same logic, if allegro is the movement, a tempo beaten in 1 makes the 16ths (semiquavers) unplayable at bar 72.

With the result that if the opening is faster to the point of exhilaration, the allegro at 3/4 is slower than we are used to and conveys a sort of lilting and pastoral atmosphere which introduces us into a different scenery altogether. 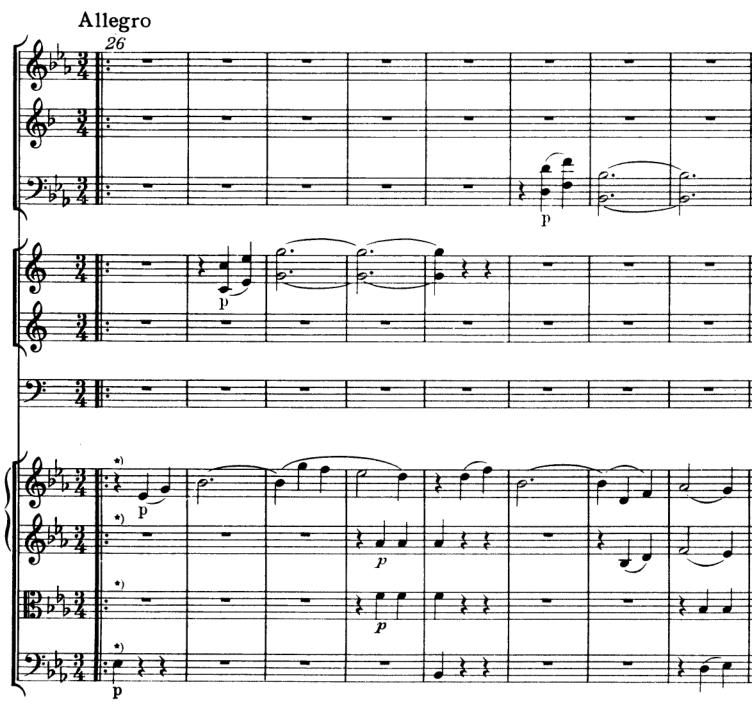 When the full orchestra joins the fray with the second theme (you’ll notice we hasten the pace there, as was common at the time), we are almost in Beethoven’s Eroica (key, tempo and almost the same notes) and the mood has changed completely.

In the following movement, to be played with two beats in a bar (2/4), we observe very short value notes to be played quickly. The movement is on no account slow. Mozart confirms the “andante” by adding “con moto“. 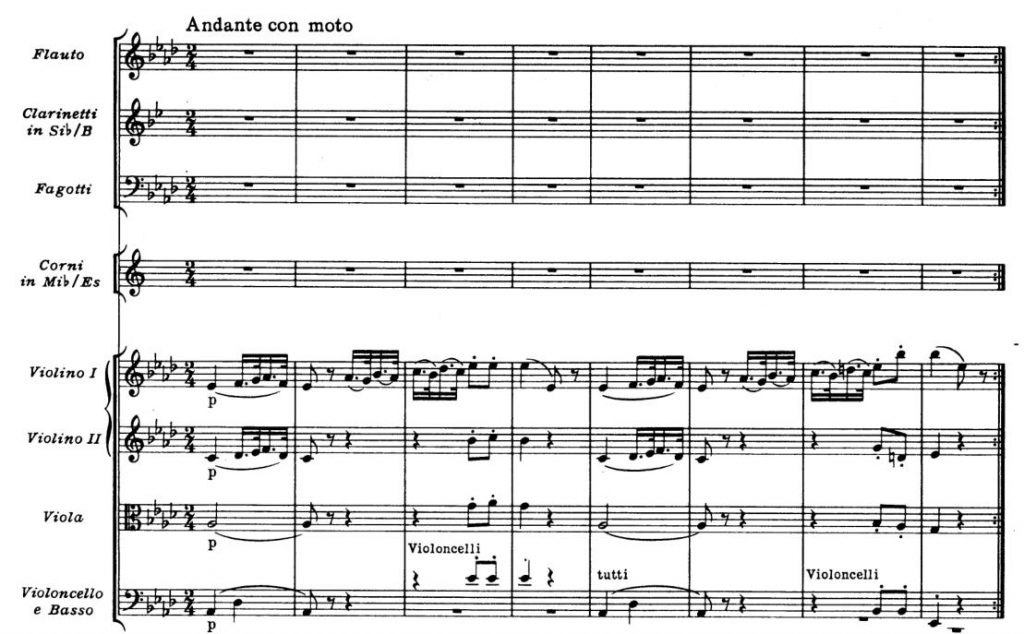 The accelerando at the end is not written (any more than the traditional rallentando).

There follows the (allegretto) Menuet and Trio (Ländler in the Viennese style) in 3/4 (beaten in 1). The question is whether to beat the music in 3 : it might be possible. If one did, one wouldn’t need to change gear for the trio. 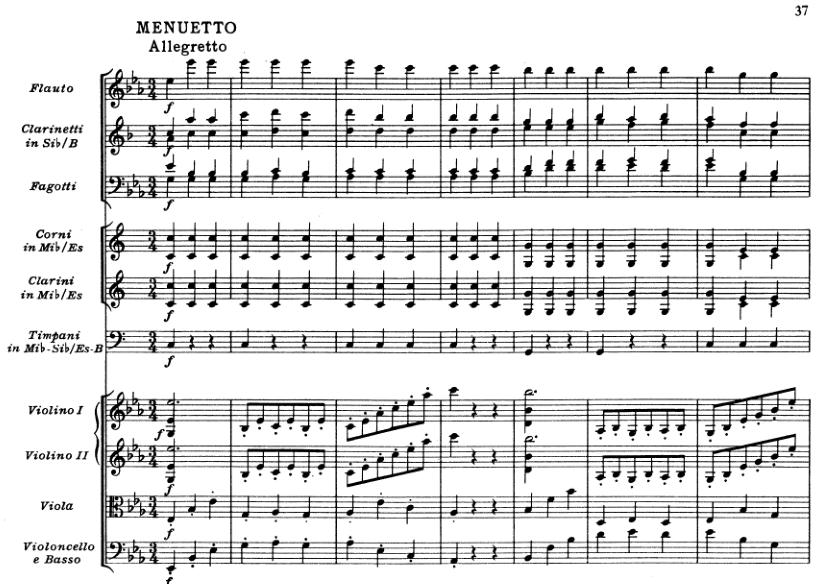 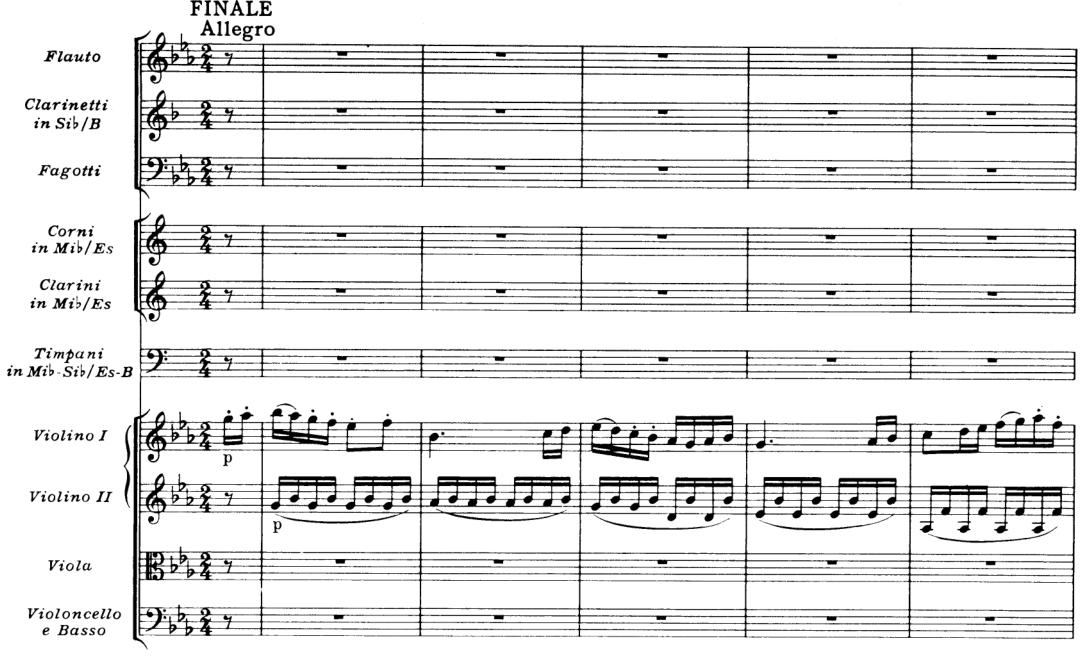 The attentive listener to the recording will hear the musicians battling with tradition. The tension is almost palpable as the orchestra fields a score which doesn’t always resemble the music they know. The result is unquestionably unfinished and the listener can be forgiven for thinking we might have been kinder to the composer.

But it is an inevitable fruit of colliding opinions and a necessary stage in the process of re-evaluation of past methods. I am sure that the next time the same principles are applied by the same musicians, it will be more polished, more tender and more poetic, as Mozart deserves.

I would like to thank Professors David H Bailey, David Daniels, Steven Larsen and Michael Wittenburg for their interest in this question and engagement in a discussion about tempo (on another piece altogether – and we seriously didn’t concur) but which brought me back to this performance which still retains some of that energy so necessary to Mozart.

We were discussing about what “slow” meant when applied to “movement”. One should remember that in days when communication was slow, composers had to be really practical and were concerned with efficiency.

If you like, that means that the instructions for how fast the piece should be played should be read at face value, especially concerning the metre : 2, 3 and 4 and nothing else except the compound 6 and 9 and 12 (beaten in 2, 3 and 4 respectively and never subdivided, at least not for music written before about 1840). If the result is unexpected, perhaps we should say “well maybe that’s what they wanted”.

And that lastly, but probably most importantly of all, the morphing of the slow movement into slow music seems to have become for many of us an aesthetic altar on which to bare our souls. And in a weird sort of way, has made the music untouchable.

Maybe if we started fighting about the way music should be played, our concert halls would start filling up again. Perhaps we have to get back into the danger zone to survive.

I think that Mozart would have appreciated that. He loved life in the fast lane and would have been appalled to see how dead we have become in our attitudes to art.

His greatest pleasure was to hear people whistling his tunes in the street.

In our hyper-connected world, where the past would appear to have started (or stopped) on 4th February 2004 with the launching of Facebook, anything much before that exists only in the unconnected world.

In libraries, in books, in dustbins …

Internet has become for most people a topical reality and the only place where they (or we) actually exist. And as we let the builders demolish our centenary habitat in order to get us to live in boxes that will not last more than a quarter of our lifespan, the world is now an open space, a sweet inferno, where the walls have been dissolved that protected us from ourselves and our friends.

Out with the family, the country, the state, the law and the common good. Exit courtesy, that magnificent invention of the Middle Ages that often made our existence more tolerable.

Connected to the sky but blind to each other, our shuttered souls wander in suspension like disconnected puppets. As we hang from the invisible strings of our telephones, seeking refuge in the spaces we have created in the clouds but which has no physical reality, we blindly dance into slavery, caressed and ensleeped by the dulcet tones of ubiquitous background music, only too content to let machines make us hum at the behest of hidden masters far removed from the visible sphere of politics and over whom we have no control.

It now appears possible that our only salvation might now be the complete collapse of our present economic system and way of life and the necessary finding of each other in the exploration of earth’s and each other’s reality. How we survive that stage is another matter. A big bump awaits us.

So why this site ?

The main purpose of an internet site is to represent ourselves as we wish others to see us. Internet is a wonderful way to do that but we have allowed it in a large degree to take control not only our past and our future, but also our present.

By prioritising the instant, it has (with our consent) all but abolished our sense of history and transformed our long term Read-Only Memory (ROM) into short term Random-Access Memory (RAM). As you will know, the difference between them is that if you switch the electricity off, the ROM will keep your memory, but not the RAM.

This is the more significant development because most of us don’t even realize it. Theoretically, it makes us programmable, as Orwell foresaw.

That is why, if we are not there to correct the picture it makes of us, we are beholden to it.

This is one way of putting the record straight.