As a young musician, Peter created in 1985 the first “generic orchestra” “L’Orchestre”. This ensemble lived briefly. Its philosophy was to put the composer first, and return to a pre-modern presentation of the musician as servant of the music and not the reverse.

While he was a conservatoire director, Peter created several innovative projects of which some are worth citing :

Most important of all, he convinced the elected representatives of the Le Puy Intercommunality to assume the expense of what became the Conservatoire du Puy, thereby insuring its survival. He transformed the École Nationale de Musique et de Danse from being a burden on the finances of the Department of the Haute-Loire to an organisation that would prove to be an important factor in the cultural development of the region and of the Greater Puy-en-Velay.

at the Frederic Chopin Conservatoire in Paris,

The Concert in the Dark / Le Concert dans le Noir 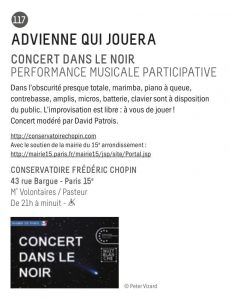 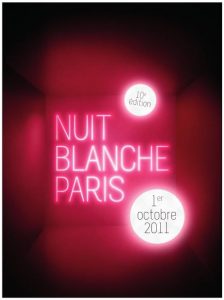 Conscious of our fear of the dark and of most musician’s reliance on being able to see what they’re playing whether on the score or the instrument in front of them, I had the idea (that I imagine many church organists have had before me) of getting our pupils to perform in the dark.

I have always loved playing in the dark and remember a wonderful evening in South Africa with the Maîtrise des Hauts-de-Seine who had invited me to accompany them on a trip they organized, improvising in a seaside church in pitch blackness while waiting for the families to turn up. It was magical. 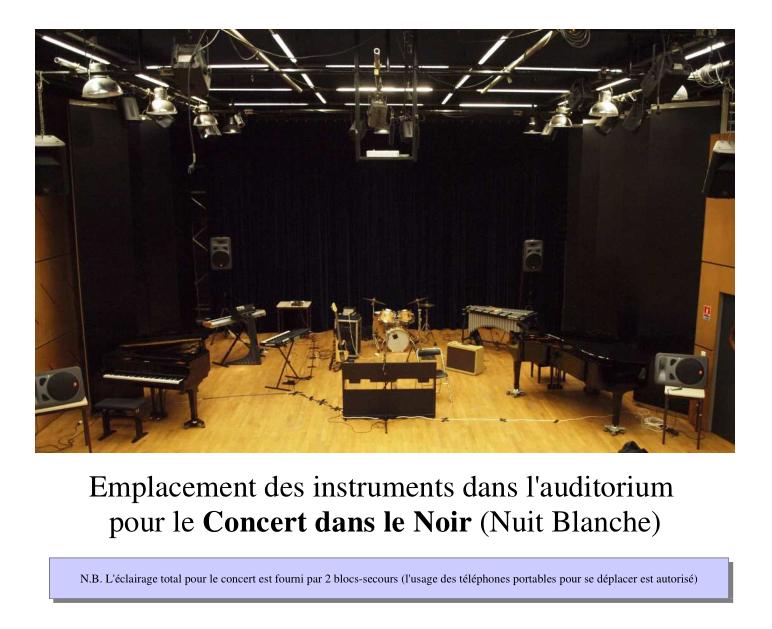 It always amazes me how our brain can calculate distances without our being able to decide for it. I think of all those virtuoso pieces that have jumps it is impossible to control by eye alone. I thought this would be an excellent way of showing our young musicians the virtues of letting themselves go. However, only the accompanist for the singing class, the remarkable musician Emmanuel Dubus ever participated and only a small handfull of pupils ever even came to the event which was open to the public and drew as many as 500 visitors per evening for the time it lasted.

By chance, the jazz professor, the remarkable David Patrois, was also interested in the idea and we organized one concert every White Night (they switch the lights on, we switch them off) from 2007 until I left in 2016. The concept was abolished that year for reasons of security although never in the 8 years we had organized it was there a problem. 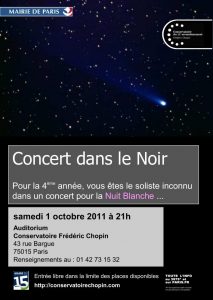 The way it worked was simple : I would open the concert in complete darkness except for the two green lights over the fire doors. I would play a Bach choral, then prolong it if necessary until another musician started to play alongside or on it or against it…

The rules were that any style was permitted, and that musicians who couldn’t improvise could play pieces they knew if they accepted that other musicians would improvise on them.

David would suggest a break after about 90 minutes, then we would start again and stop at midnight, when I would join in again in order to bring the music round to an ending with the same Bach choral.

The result was very uneven, as you might expect, but enormous fun and sometimes quite stunning.

In 2013, Greece was experiencing one of its worst moments in recent history.On 28th April, the Greek parliament approved a reform bill abolishing 15,000 state jobs by the end of 2014 including 4,000 in 2013, making it easier to fire civil servants, increases the working hours of teachers and cuts a property tax by 15%. And on 11th  June 2013 it shut down the country’s Public Broadcasting Service ERT (Wikipedia)

The conservatoire had just taken on a new and gifted clarinet teacher of Greek origin. Considering what I thought was a spiteful European press campaign waged against his people , we decided to honour his country in selecting it for the theme of our open days in June of that year.

In my introduction, I wrote :

I continue to believe that music is one of the supreme forms of communication and that it can play a political rôle when we choose to use it thus.

Music from the Land that disappeared 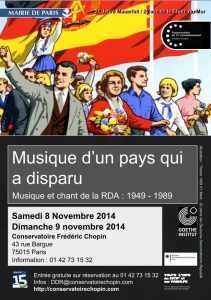 This was the only celebration of the 20th Anniversary of the Fall of the Wall to be organized in Paris and one of only two in the whole of France. One of the most important countries in the world had just vanished and no-one was even mentioning it. The only slant was a general rejoicing (forgetting the people most concerned by the financial tsunami that had engulfed them, the East Germans themselves) that at last Germany was united.

But at what cost.

Find out more, if you’re interested, on the page devoted to this action. Or consult the programme here.

For this, Peter was awarded the bronze medal of the City of Paris, which he plans to return as a measure of economy for the city.